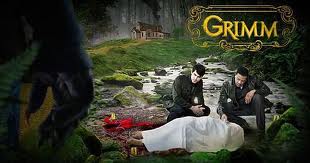 "Grimm"...I'm not sure what to think anymore about this show. Call me stupid (I'm sure some will) but I just don't "get" the deal about the different creatures. Only a Grimm is supposed to be able to see the creature's true nature, how they really look, right? So, are you telling me that all these different creatures cloak or mask themselves against humans? No human, except for those of the Grimm heritage, can see the actual creature. All they see is another regular, average "Joe" or "Jane" going about their business. It's one thing if one type of creature (or maybe a few) are able to mask (conceal, cloak - what do you call it?!) themselves, but ALL the MANY varieties have that ability?

I don't know. I guess it's like werewolves and vampires who can look completely human and if they choose, can also transform into their scary-looking version of themselves.

Another rant I have about "Grimm" - When each episode begins, a few sentences are thrown on the screen to be quickly read by the viewer. The lines are from one of the Grimms' fairy tales that relate to the story you're about to watch. The problem is, my husband and I will look at each other and try desperately to figure out WHICH fairy tale the few lines are actually referring to. Of course, as the show proceeds, you get your answer, but I wish under those few lines it would reference the related fairy tale right from the start.

Other thoughts: Nick's fiancee, Juliette, is starting to snoop around and you'd think at some point she's going to figure out Nick's unique "Grimm" talent or he's going to tell her about it. Same for Nick's detective partner.

My raves about "Grimm": How cool is Aunt Marie's trailer? It's jam-packed with old books that explain about the different creatures, weapons of all sorts for fighting the bad dudes, magic potions, mystical kick-butt thingys, and stuff we have yet to learn about!

Also, I love Monroe. Sorry other characters - but Monroe is the star of the show. On the January 20th episode, it seems the creature community isn't thrilled that Monroe is helping Nick - a Grimm - and in turn beat the crap out of him (Monroe). A scythe symbol drawn in blood on Monroe's car translates into Reapers of the Grimm. Not good for Nick...or Monroe helping him with his detective cases. But the beer bottle toast between the two seal the deal that they are buddies and Monroe ain't backing down. He'll be better prepared next time...Yes!

Here is a list of Grimms' Fairy Tales found at:
All Family Resources