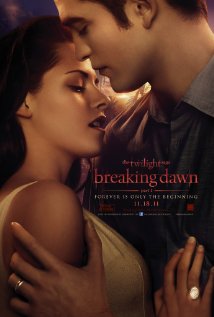 Yes, I've read all 4 books in the Twilight Saga, and the Bree Tanner one, and have the Twilight Companion book and purchased the DVDs as they've become available. I congratulate Stephenie Meyer on her success! Oh, and I've also read her other book, 'The Host' which is supposed to be made into a movie, too. And now onto the 'Breaking Dawn' excitement:

I love trivia! Here's some fun stuff (credits to www.imdb.com):

>According to Bella and Edward's wedding invitations, the address of the Cullen residence is listed as 420 Woodcroft Ave Forks, WA.
>Kristen Stewart has said in an interview that filming Bella and Edward's honeymoon sex scene was very awkward, and that by the end of the shoot, she didn't even feel like they had just filmed a passionate scene.
>Robert Pattinson went through a strict diet and exercise regime for six months in preparation before filming. He stopped his routine after filming the much-talked-about sex scene.
>Stephenie Meyer, the author, has a cameo role as a wedding guest. She can be seen as Bella walks down the aisle.
>One of the key elements in both the book and the movie was is how Edward tries to distract Bella with activities in order to keep her from thinking about having sex again. In the movie, one of the activities is a game of chess, with both red and white pieces, just like the pieces on the cover of the book.
> Shortly after the credits roll there is an additional scene. (There is no extra scene at the very end of the credits.)
>Edward and Bella are vacationing on Isle Esme and are seen playing chess in broad day light under no cover of trees and Edward is not shown to be sparkling.

Taglines: Forever is only the beginning.

Here's a very cool site: http://www.eonline.com/news/vampires  Hollywood's Hottest Undead & Total Twilight coverage. Oops, I need to go back and bookmark that site to indulge my fondness for vampires! (and look for a similar site to entertain my passion for werewolves!)