"Rise of the Planet of the Apes" (DVD)

I absolutely LOVED this movie! I don't care if someone says they hated it to my face or thought it was so-so because to me it doesn't matter - (and that is a rare statement from me as I'm always worried about what other people think) I say again - I LOVED "Rise of the Planet of the Apes"!!!

I'm also a huge fan of the entire "Planet of the Apes" movie franchise. Over the summer my husband and I watched all the original movies filmed/created way back starting in 1968. I purchased through Amazon the "Planet of the Apes" Legacy Collection. I'll admit, a few of the movies in between the first one and the last one were a tad weak and even bordering on weird...but we watched and absorbed all the good with the bad. 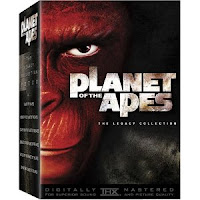 Link to Amazon for Legacy Collection.


Official Synopsis for "Rise of the Planet of the Apes":
During experiments to find a cure for Alzheimer's disease, a genetically-enhanced chimpanzee uses its greater intelligence to lead other apes to freedom.

From Internet Movie Database:
"Rise of the Planet of the Apes" (2011)
Stars: James Franco, Andy Serkis and Freida Pinto

Back to my thoughts: It was exciting to see tie-ins to the older movies; an example: the water hose scene -- in the old movie, the human was blasted with the water vs. in this new one, it was the ape. The facial expressions and emotions of the apes (mainly Caesar) completely ripped open my own heart and played with my feelings. Several times I found myself crying. Throughout the movie, I kept making connections to the original films, so anyone who is a major fan and remembers and loves those old movies, will be thrilled watching this new one. Clues or even full-blown explanations are presented about what humans did...what caused the end of life as we know it now. If you can recall important "Planet of the Apes" plot details and the storylines from the old movies, then this new "Rise..." works out perfectly and makes sense. Even if a viewer didn't watch or doesn't remember any of the old movies (which would be a shame, but) they should still enjoy "Rise of the Planet of the Apes" for the engaging plot, the awesome & realistic special effects, of course what it does to mess with your emotions plus realizing what the consequences are when things go terribly wrong with lab experiments.